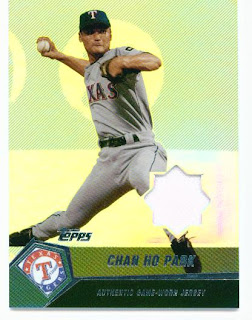 So Chan Ho Park, shown here on card number CP of the 2004 Topps set, made the NLCS Roster. The Phillies dropped Brett Myers from their roster to make room for Park. Apologies to Ranger fans for today's card but coming up with game-used or auto cards of former Rangers' players involved in the post-season is not always easy.

Heading into the game tonight the Dodgers added Hiroki Kuroda and Scott Elbert. Jeff Weaver and Jon Garland got the axe to make room.

Not being a regular follower of either team I am unsure about these moves. On the surface I question dropping Meyers for Park but have no idea on the Dodgers' moves. Any fans of the clubs care to add their thoughts?
Posted by Spiff at 9:53 PM

I'm not sure about Elbert, unless they thought they needed another lefty in the pen against the Phillies (Weaver's a righty).

I think Myers is basically done. He just had to many injuries to pitch. He has likely thrown his last pitch as a Phil.