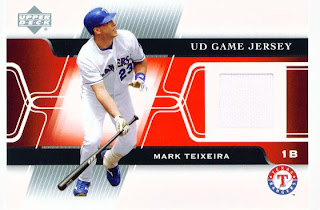 Sorry about not posting last night. Had a work function in the evening and then watched the last part of game two of the World Series before running out of gas. Please consider this to be yesterday's post.

Have to post a card of Mark Teixeira as much as I would rather put one up to celebrate a Phillies win. Money Man, shown here with a piece of his jersey in Upper Deck's 2005 Game Jersey set, hit a solo home run off Pedro Martinez to tie the game in the fourth inning. A later shot by Hideki Matsui would give The Empire a one run lead and that would be all they would need. They did tack on an insurance run in the seventh though.

At least the 3-1 game wasn't the thumping the Phillies handed the Yankees in the first game. Hopefully the momentum hasn't swung and the Phils will be able to take advantage of being at home tomorrow night.
Posted by Spiff at 12:46 PM