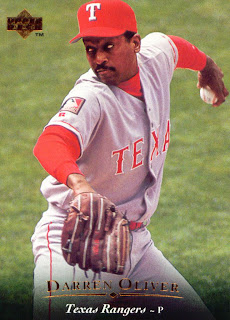 Darren Oliver was flawless last night against the Yankees. Oliver, seen here on card number 153 of the 1995 Upper Deck set, came in with the bases loaded and Jorge Posada at the plate. He managed a double play ball to get out of the inning. Darren then pitched two more scoreless innings to keep Anaheim in the game. In the end it didn't matter much though as the Yankees won 5-2 to eliminate the Angels.

This leaves the Phillies as baseball's last hope to avoid a Yankees' championship. If they fail then we will all be condemned to hearing about how great the Yankees are until the end of the 2010 World Series. Go Phils!

In other baseball news, the Cardinals have resigned Tony La Russa as their manager. Only one coaching position will change and that will be the hitting coach. Mark McGwire will be returning from exile to fill the position. I like this news. My brother was a big McGwire fan growing up and I always liked Big Mac. He probably has a lot to pass on to young players. McGwire plus La Russa could make the Cards an even more dangerous team than they have been.

Before anyone makes any accusations against Mark please be prepared to bring forth proof of wrong-doing or cheating. Remember that the Mitchell report cleared him and that the only person to publicly accuse him of PED use was Jose Canseco. Canseco was accurate with a lot of his names but not all of them. He also has a serious axe to grind against McGwire since he felt the A's slighted him by trading him to keep McGwire. Merely not wanting to discuss the issue with a bunch of overreaching, grandstanding politicians is not proof of guilt.
Posted by Spiff at 3:12 PM

I think Oliver pitched ok. In Game 2 he was a bit shaky.