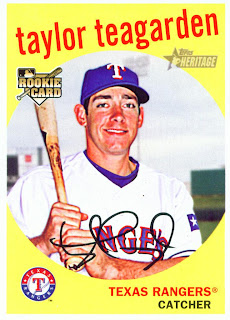 Taylor Teagarden came through for Texas in the ninth inning last night against Seattle. Taylor's RBI single put the Rangers on top for good and nets him today's card, number 672 in the 2008 Topps Heritage set.

The line drive single brought Teagarden to 2-for-5 on the night with two runs scored and a RBI. That was a good night but not quite as good as Chris Davis' 3-for-5 night. Davis has just been on a tear recently.

Hitting coach Rudy Jaramillo is a free agent this upcoming off-season. Hopefully Texas can resign him. He says he wants to stay with Texas but there are some calling for his ouster after the disappointing offensive season the team has had.

I say the team should make every effort to re-sign Rudy. Youth has it advantages and disadvantages. One of the latter is all too often impatience at the plate and thus lower offense later in the season. A coach can try to counter youth's natural impetuosity but the going is often slow. Next year the offense should be back in force. Rudy has shown his value for the past 14 plus years, better to not toss him too quick and live to regret it as the Astros have done.
Posted by Spiff at 6:36 PM