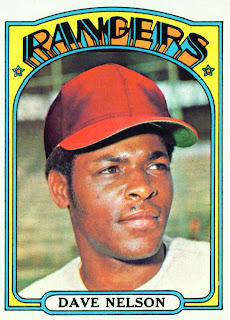 Not much going on as the baseball world waits for the World Series to kick off. Seeing as it had been awhile since we visited 1972 I thought this would be an opportune time to do so. Today we see Dave Nelson on card number 529 of the set.

The Senators acquired Dave in a trade in December of 1969 with the Indians. That trade also brought in Horacio Pina and Ron Law. Prior to that time Dave had been playing sporadically for Cleveland in 1968 and '69. Once with the Senators he bounced in and out of the minors in 1970 and '71. His most notable accomplishment with Washington was that he scored the last run ever in RFK stadium.

In 1972 Nelson made the move to Texas with the club and appeared in a career high 145 games, most of them at third base. He would have 51 stolen bases that year, second in the American league. He would also lead the league in times caught stealing with 17. He started to get a reputation for speed on the basepaths. Dave also improved significantly in runs scored and walks taken.

Dave's card contains another fine example of Topps' mediocre airbrushing skills. As bad as his cap looks though, it doesn't hold a candle to Hal King's cover. Looking ahead, there are only five more cards left that I haven't posted from the 1972 Topps team set.
Posted by Spiff at 7:43 PM