A cloud rises in the East. 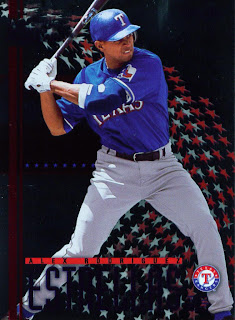 So the post-season has begun. The Phillies jumped on top of the Rockies 5-1 to take the lead in their series. Good news for the readers who want to see the Rox swept. Right now the Dodgers are leading the Cardinals 2-1 in the second inning. The Angels/Red Sox series starts tomorrow.

The most disturbing development by far occurred in New York as the Yankees jumped on the Twins 7-2. Former Ranger Alex Rodriguez, shown here his 2003 Donruss Estrellas Estrellas card, number E-2, had a nice night at the plate. He helped advance The Evil Empire with a 2-for-4 night with two RBI and a run scored.

This does not bode well for my hopes of seeing the Yanks exit the playoffs in the first round. Perhaps this is just a small cloud in the Twins sky and they will be able to defeat the darkness.
Posted by Spiff at 9:10 PM