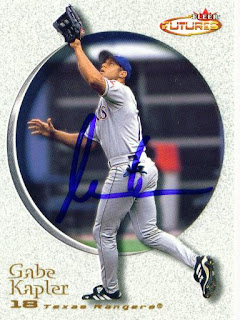 Number 19 on T.R. Sullivan's list of the top fifty decisions that have shaped the Rangers history is the trade of Juan Gonzalez on November 2, 1999. Sullivan states that the trade brought an end to the successful Melvin-Oats run and the return did not have the desired effect.

So how best to evaluate the trade? Well, let's start with Alan Webb. He was a career minor league pitcher who never made it above Double A in the one season he pitched in the Rangers system. A non factor.

Next let's take a look at Bill Haselman and Greg Zaun. Both were backup catchers in 1999 and Haselman continued in that role in 2000. In 1999 Zaun hit .247 with an on-base percentage of .314 for Texas. In 2000 Haselman posted a .275 batting average and a .329 on-base percentage for the Rangers. Probably a slight advantage to Texas here.

Pitchers. There were three pitchers involved in the trade: Danny Patterson, Fransisco Cordero, and John Thompson. Thompson promptly tore his rotator cuff and missed the entire 2000 season. Four surgeries later he appeared in two games for Texas in 2005. He posted a 21.60 ERA in 1.2 innings before retiring. Cordero spent 6 plus seasons with the Rangers. After an ugly 2000 season he settled down and turned in a decent performance in 2001 and strong showings in 2002, 2003, and 2004. In 2005 he was good but not sparkling. A poor start to the 2006 season led to his being sent to the Brewers.

Patterson was a top prospect for Texas but never seemed to pan out. After being sent to Detroit he lasted five years without ever getting his ERA below three. He also had 72 saves less than Cordero did in the same time span. Slight advantage to Texas on the pitcher side of things.

What Texas lost when they sent Juan Gonzalez to Detroit was power. The other players involved in the trade pretty much balanced each other out but Kapler and Catalanotto were just not able to replace the boom in Juan's bat. Of course Juan wasn't able to replicate his 1999 season either. After 2000 he had just five seasons left - only one of those would be even close to the Gonzalez who had powered the Texas batting order.

So, did the trade bring an end to the Rangers' success? Looking at the numbers I think it's hard to conclude that it did. Gonzalez just wasn't as effective after 2001 as he was before. Even bringing him back to Texas in 2002 didn't help.

Perhaps what the trade did was lower the curtain. The successful run was over, what Gonzalez's departure did was to confirm that in the minds of the fans. As to the return? Well, it obviously did not have the desired effect since the team did not return to the postseason with those players.
Posted by Spiff at 5:48 PM

Alan Webb sure was a great runner! The Rangers also tried to get Jim Ryun, but he was already retired.