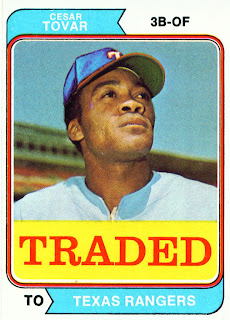 Cesar Tovar, shown here on card number 538T, is the last player card in the 1974 Topps Rangers team set. Cesar looks like he can't decide if being at the end of the line or wearing a terribly airbrushed cap is worse.

Texas purchased Cesar's contract from Philadelphia on December 7, 1973. The back of his card describes him as a "handyman" and he had played a variety of positions with the Phillies. With the Rangers he would stay in the outfield with occasional appearances at designated hitter.

1974 started off a pretty rough for Tovar. An early leg injury limited him to just three games in April and he really didn't hit his stride until June. That was late enough that he never nailed down a starting spot and instead served as a backup for most of the year. Manager Billy Martin liked Cesar though so he still saw almost as much action as a starter.

In 629 plate appearances Tovar managed a .292 batting average and a .354 on-base percentage. He stole 13 bases while getting caught nine times. He also walked 47 times while striking out 33. "Pepito" had some power but it was mostly as a doubles hitter - he knocked 24 of them on the season as compared to 6 triples and 4 home runs.

In the field Cesar played in 1,171.2 innings. That total was for all three outfield spots combined. His fielding percentage was .980 - identical to the league average. Some of his 7 errors may have been attributable to a lack of communication between him and the other outfielders. Apparently there were some difficulties since he was using a police whistle by the end of the season to warn off the other fielders. I suppose that was an early example of tweeting one's location.

All things considered, Cesar had turned in a successful campaign in 1974. His offensive numbers were up over the previous two years and he had seen almost four times as much action in the field as with Philadelphia in 1973. The trick was going to be to ward off further injuries and keep his age (he was 33 in 1974) from starting to catch up with him.
Posted by Spiff at 10:01 PM