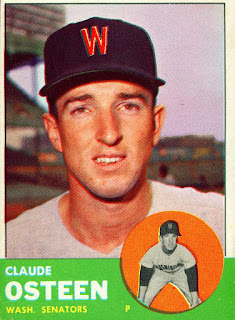 Claude Osteen had a pretty good season in 1962 and was looking to build on it in 1963. He was able to do that and lock himself into the Senators starting rotation.

Claude Osteen was the workhorse of the Washington pitching staff in 1963. He was also one of the best pitchers on the team and one of their few bright spots. It is a testament to the support he received that he ended the year with a 9-14 record.
Posted by Spiff at 7:52 PM