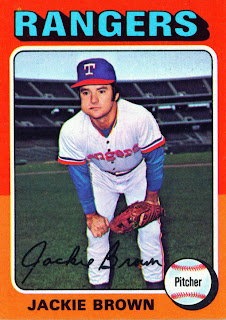 In this last of the pre-recorded posts we see Jackie Brown on card number 316 of the 1975 Topps set. You can tell this is a vintage card by the chaw of tobacco in Jackie's cheek. Can't have that anymore. Could be a bad influence on the kiddos.

Jackie started the 1975 season doing long relief and spot starting for the Rangers. All told he would appear in 17 games for Texas. Seven of those games were starts. Interestingly he completed two of his starts. Not something you would expect out of a spot starter/long reliever. One of those complete games was a shutout.

Fergie Jenkins, and Steve Hargan, needed some help in the rotation. Jackie's chances of landing a starting gig were slight. His ERA was also higher than everyone else in the bullpen other than Clyde Wright. Wright was a lefty and Jackie threw right. Apparently that made him expendable. On June 13, 1975 the Rangers traded Brown, Jim Bibby, Rick Waits, and $100,000 to the Cleveland Indians for Gaylord Perry.