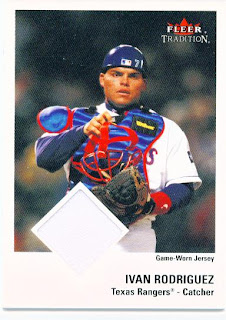 Wow! Seems like a lot going on since I posted on Thursday. I'll try and get up to speed. Since I'm doing some catching up I'll leave you with this 2003 Fleer Tradition card of catcher Ivan Rodriguez and a piece of his jersey.

When I left off posting the Rangers were two games up on the Angels and seemed to be unable to gain any ground. Now they are seven games ahead and winning on the road. Very nice turnaround.

Michael Young is doing well. Well enough that at least one MLB.com writer has mentioned his name and MVP in the same article. Ron Washington is also trying to advance Michael's cause.

On the downside of things the club is now saying that Adrian Beltre is probably out until September. That's a real bummer with the season he was having. Hopefully he is rested and ready to come back for the final push.

Sorry about the lack of a post yesterday. I had intended to get back up and running then but ended up putting in 14 hours at work. Kind of made the day short for posting. Back now though and ready to cheer the Rangers down the stretch.