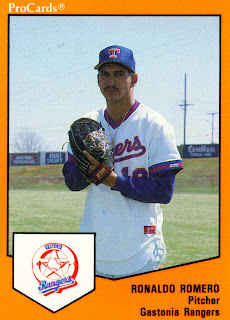 Texas signed young Ronaldo Romero, shown here on card number 1016 of the 1989 ProCards set, in 1987. In 1988 he would play for the Sarasota Rangers in Rookie ball. With an ERA of 3.05 Ronaldo showed enough promise to get promoted to Single A the next season.

That performance wasn't enough to get Romero bumped up to Double A. At 18 years old there was time for improvement though. Another season at Gastonia was in order.

Romero started off the 1990 season like a house afire. By the time he appeared in his eleventh game on May 14th he had a 1.35 ERA. Something had clicked it seemed. Ronaldo got off to a rocky start that night and gave up an uncharacteristic seven runs in the first two innings. Sitting in the dugout in the top of the third he began to have trouble breathing and complained that his heart was fluttering. As emergency personnel responded, his heart stopped. CPR was initiated and he was transported to the local hospital. At 2045, a half an hour after his collapse, he was pronounced dead by the emergency room doctor. At age 19 Ronaldo Romero's career and life were over.

An autopsy later determined that Romero suffered from an enlarged heart and that was likely what led to his fatal heart attack. With that in mind, there was little that anyone could have done. Young people just don't survive heart attacks and there is usually little sign that they are coming until it is too late. Apparently that was the case here. Trainer Tom Tisdale later said that Ronaldo had told him prior to the game that he was feeling the strongest he had all season.

Sorry for the rather downer post. Romero's card was simply the next to come up in the team set. I had no idea what I was about to uncover as I scanned it in and began to research. I suppose that's the thing to keep in mind here. Tomorrow is not guaranteed and nobody knows what the future holds. We all need to make sure that we are prepared to step into eternity at any time.