Another comeback, another walk off. 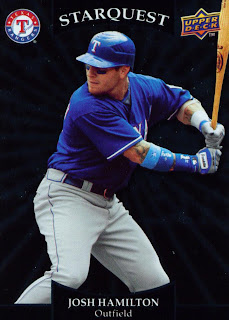 Well, Alexi Ogando got slapped around a bit by the Mariners last night. Seems a little odd that anyone would get slapped around by the Seattle offense this season but that's what happened.

Fortunately the Rangers' bullpen was able to take over with two outs in the top of the third. At that point the Mariners had six runs to the Rangers three. The bullpen shut Seattle down though and they didn't score again. In fact, the Mariners got just three hits after Ogando left the game. Texas scored though. Two runs in the seventh and another in the eighth to tie things up.

In the bottom of the ninth Ian Kinsler worked a walk and Endy Chavez got aboard with a bunt. That brought up Josh Hamilton, seen here on card number SQ-46 of the 2009 Upper Deck StarQuest set. Josh laced a single and Kinsler scored from second for a walk-off win. Good stuff.

That kept the Angels a game and a half back but no further as they rallied late to beat the Yankees in New York. It would be nice to see the Rangers use this series with Seattle to pick up another game on Anaheim.