Odd Moments: Knocking a hole in the wall. 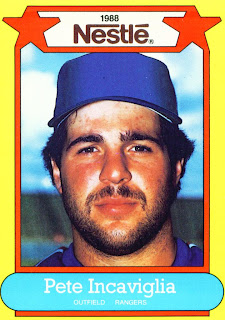 Late in 1985 the Rangers obtained Pete Incaviglia, shown here on card number 20 of the 1988 Nestle set, from the Montreal Expos. Inky had yet to see Major League action. For Spring Training in 1986 the Rangers would be getting into shape in Florida. Pete was there along with the rest of the team.

During an exhibition game Incaviglia got a handle on a pitch and blasted it into the outfield. The ball rocketed to the wall and appeared to be ready to ricochet off the wall. To everyone's amazement that didn't happen. Instead the ball smashed a hole through the wall. Truly a spectacle of incredible strength!

Later investigation revealed that the wall at Pompano Beach Park was made of wood. That wood was rotting away. Such information didn't keep the Rangers from getting some great mileage out of the story. It would stick with Inky throughout his time with Texas. I can remember my Grandfather talking about it and hearing it referenced during broadcasts of Rangers games. Needless to say, the part about the rotted wood never seemed to make the story.