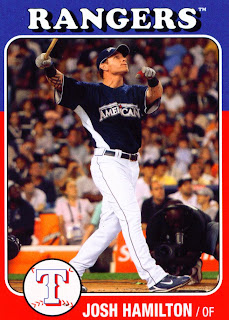 Apparently I should have held off on last night's post. The game came to quite a different conclusion than I thought that it would.

When I posted the Indians were leading the Rangers 7-3 in the top of the sixth inning. The Cleveland lead was due mostly to an early meltdown by Derek Holland. Dutch gave up 6 runs in 1.2 innings. Scott Feldman then took over. He managed to shut the Indians down for the most part as he gave up just one run in 3.1 innings. That left the score at 7-3 in the the middle of the sixth.

Shortly after I posted Texas began to claw their way back into the game. They picked up two runs in the sixth to run the score to 7-5. There it stayed until the bottom of the ninth.

In the bottom of the ninth Josh Hamilton, seen here on card number OPC-33 of the 2009 Upper Deck set, managed to get on base. With two outs Michael Young then launched a two-run homer to tie the game. Into extras.

Nothing happening in the tenth or the top of the eleventh. Bottom of the eleventh Elvis Andrus bunted his way on and then went to second on a wild pitch. Up came Josh Hamilton. He hit a weak infield hit to score Andrus. From second. On an infield hit. Incredible. Rangers win!
Posted by Spiff at 9:03 PM