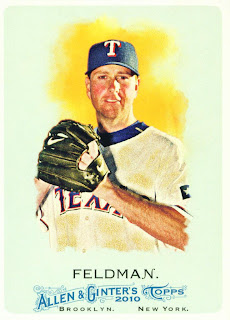 Checking in on the 2011 season that is. Kind of a mixed bag over the last few days but at least the Rangers seem to have come out of their slump.

With just two games separating the two teams going into last weekend, the Rangers welcomed the Angels to Arlington. Momentum seemed to be in the Halos favor. To be frank, I was expecting to two clubs to flip-flop in the standings before the series was over. That was not too be. The Rangers suddenly woke up and took two of three from the Angels to come out of the series with a three game lead. They then picked up an additional half a game yesterday when the Mariners managed to beat the Angels while Texas took the day off.

Nice to see the guys pick up a little ground on Anaheim. They're not out of the woods yet though. While the Angels are playing a couple of fourth place teams in the next week the Rangers will be facing off with the Devil Rays and Red Sox. That with Nelson Cruz going back on the Disabled List today with a hamstring injury.

With Tampa Bay coming to town I must confess to being less than impressed to hear that Scott Feldman, shown here on card number 259 of the 2010 Allen and Ginter set, was starting tonight. It's not that I dislike Scooter, it's just that I don't care to see him start a big game. Ron Washington didn't ask me though so Feldman got the start. Good thing he did. He just left the game with a two run lead. In six innings he gave up just two hits and held the Devil Rays scoreless. Very nice work to see from a spot starter. If Texas doesn't hold on to this game it won't be Scott Feldman's fault.