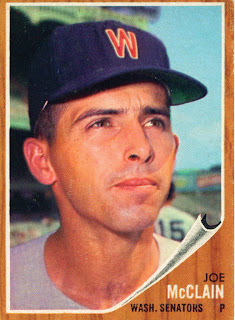 Joe McClain, shown here on card number 324 of the 1962 Topps set, had spent the entire 1961 season as a member of the Senators starting rotation. In 1962 he returned to the game with the goal of making that spot in the rotation his permanent home.

Things went badly for Joe from the word go. He got four starts in ten appearances and completed two games. He wasn't able to win a game though and got tagged with the loss four times. His ERA ballooned to 9.38 and his WHIP climbed to 1.833.

McClain was a control specialist and apparently his control had deserted him. The results were predictably not good. After just 24 innings the Senators had seen enough. They sent Joe down to Triple A to see if he could regain his 1961 form.

Joe pitched 113 innings in 24 games with the Syracuse Chiefs to finish out the 1962 season. He managed to get his ERA down to 4.62 and his WHIP to 1.513. His control was still a problem but at least he struck out more than he walked (59 to 36). Some improvement had been made but not enough, McClain ended his dismal season at Triple A.