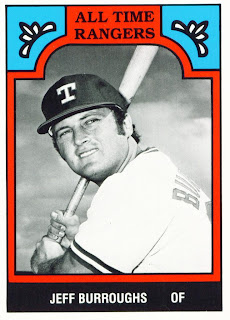 Another ugly night at The Ballpark in Arlington tonight. This will drop the Rangers down to a mere two games over Anaheim. That with the Angels coming into town and Texas on a skid. Starting to get frustrating. I think I am going to take a break from the 2011 season this weekend. Good time to try and get caught up on T.R. Sullivan's top 50 lists.

Number 5 on T.R.'s list of fifty best seasons is Jeff Burroughs' 1974 performance. I have already covered this season in detail here. To recap just how good Jeff's season was, at the time this 1986 TCMA All Time Rangers card was issued Burroughs was the only Rangers player ever to win the American League MVP award.

Hard to forget a 118 RBI season with a .301 batting average and 25 long balls. Amazingly it seems that a large number of Rangers fans have done just that.

It is. Not quite as weird as the Inky card that came up next though.