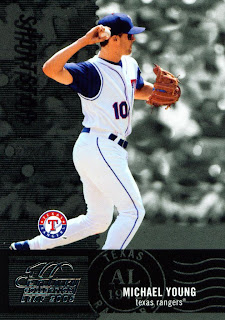 Lots going on in the last couple of days with the Rangers. First off, a comeback win last night against the Indians bullpen to hang on to first place in the American League West. Great to see the team not give up and pull out the victory.

In last night's game Michael Young, seen here on card number 110 of the 2005 Leaf Century Collection set, went 2-for-4 at the plate. Not too bad a night. It was the second hit though that stirred the most reaction from Rangers fans. Michael's infield hit didn't score a run but it was hit number 2,000 for his career. All 2,000 hits have come in a Rangers uniform. That puts Young in some pretty nice company career-wise and cements his status as the player with the most hits all-time as a Ranger. Congratulations Michael Young. It would be nice to see number 3,000 come in a Rangers uniform.

Some bad news for Arthur Rhodes this morning. After signing with Texas in the off-season he experienced some early success. Then came the struggles and the addition of Mike Adams to the bullpen. Following that trade Rhodes was designated for assignment. Less than a week later the team has placed him on release waivers. That means he becomes a free agent on Wednesday. Tough ride for Arthur.

Former Rangers pitcher Kenny Rogers had a smoother ride. On Saturday he was inducted into the Rangers Hall of Fame. I missed his speech but apparently it was pretty well done. Congratulations to The Gambler.

Labels: Card of the Day, Leaf

Michael Young is amazing! He's going to go down as one of the greatest Rangers ever. He should have a statue built when he retires.