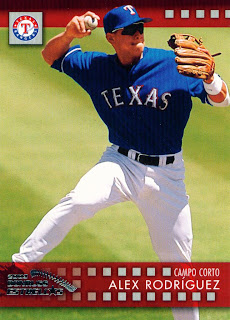 Bummer on the loss last night. I guess at least the Angels lost as well so the Rangers didn't lose any ground. With Holland struggling and the team losing this might be a good time for the next installment in the Odd Moments series.

In January of 2004 the Rangers and Alex Rodriguez, shown here on card number 96 of the 2003 Donruss Estrellas set, were in what appeared to be the last stages of a nasty divorce. Rodriguez had publicly embarrassed the club by making it clear that he did not want to play in Texas. He had asked for a trade and even gotten involved in trying to set one up. Obviously it was just a matter of time before the club found a way to dump Alex.

Thus it was a bit of a shock when the Rangers and Rodriguez held a joint press conference. Something was up - Buck Showalter, Tom Hicks, and Alex were all in tuxedos. Only slightly more jarring than the attire was the announcement that was made. Alex Rodriguez was now the team captain (the first since Buddy Bell). The reaction was underwhelming. Alex made a situation appropriate comment when he said, "I'm probably pretty sure it will work out for the best." Tom Hicks said that the disputes and discord were past. Buck Showalter made confident noises.

Looking back on the incident it is plain to see that it was a farce from the word go. Tom Hicks had already been taken once by Rodriguez's agent, Scott Boras. In following Boras' suggestion to name Alex team captain he was taken again. Naming a lying, whining, selfish, immature malcontent to an official leadership role on the team wasn't going to help anyone. It wasn't going to help the team's finances, their relationship with Rodriguez or their win-loss record. It's hard to believe that Showalter honestly thought that it would. It's incredible to think that Hicks could be so naive. Obviously Rodriguez didn't buy any of it for a minute.

Captain or not, Alex wanted out. Two weeks later the team obliged.