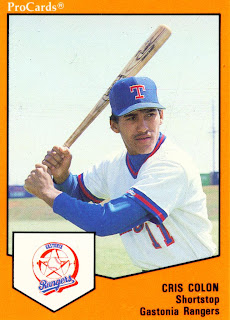 Two losses to end the road trip. Anaheim picks up a couple of games in the standings. Ugh. Time for a break from the 2011 season.

Cristobal Colon, seen here on card number 1014 of the 1989 ProCards set, was just 17 years old when the Rangers signed him in 1986. As befitting a shortstop he had been born in Venezuela. In 1987 he started his pro career with the Rookie League Gulf Coast Rangers. He started the 1988 season with Butte in the Pioneer league, also a Rookie level league. After 49 games with Butte he moved up to Single A and the Gastonia Rangers.

Cris would put in a full season with Gastonia in 1989. He would appear in 125 games.

In 500 plate appearances Colon's batting average was an uninspiring .226 and his on-base percentage was an even less exciting .243. Part of the problem was Cris' 95 strikeouts as compared to just ten walks on the season. That's a dangerous ratio at any level of play.

Cris also struggled in the field. In 550 chances at short he committed 47 errors for a .915 fielding percentage.

At just 20 years of age Colon was looking at a career change. If he couldn't get the holes in his bat and glove plugged he was not going to be playing pro ball for very long. He was obviously struggling. Single A is not a good level to start that. Of course the longer than normal stay at Rookie ball may have been a harbinger of what was to come at Gastonia. As it was he would get more time, Cris would be starting the 1990 season at Single A with Gastonia. What he would do with that time remained to be seen.