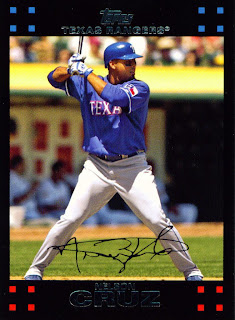 So the Rangers welcomed the Mariners to Arlington last night to kick off a series. Thanks to a great pitching performance by Matt Harrison and the Texas offense coming alive the Rangers were able to grab the 9-2 win and pick up half a game on the idle Angels.

Harrison went seven innings and gave up just two runs while striking out six. That was the total number of runs Seattle got and it was a good enough performance to give him the win.

Since I am running a little short on Harrison cards I am going to give the card of the day to Nelson Cruz. He appears here on card number TEX13 of the 2007 Topps Texas Rangers team set. Last night Nellie went 3-for-4 with a walk, a home run, and two RBI. Nice to see him heating up.

Mike Napoli and Yorvit Torrealba both continued their respective offensive runs. Mith Moreland also had a very good night at the plate. Very good to see some of the guys in the lower part of the batting order contributing.

Quick note on Matt Harrison's tenth win. That gives all five Rangers starters ten wins on the season this year. That's the first time the team has had that many pitchers with that many wins since 1996. It's the first time in team history that the team has had five starters with ten wins each. Awesome to see the rotation holding together this far into the season. Hope it continues.