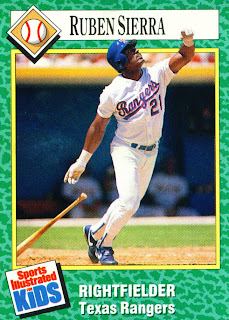 I was going to wait and post on tonight's game. Alexi Ogando got knocked out in the third inning though and James Shields was brilliant. Looks like the Devil Rays are going to win this one. Time for the next installment in T.R. Sullivan's fifty best seasons in Rangers history list.

Number six on the list is Ruben Sierra's 1989 season. Sierra, shown here on card number 165 of the 1990 Sports Illustrated for Kids set, was 23 years old in 1989 and had been in the Majors for three years. In 1989 his speed and power came together.

Sierra's season did not go unnoticed. He came in second in MVP balloting. He was also named to the All-Star team and won a Silver Slugger award. This was the season that the Rangers and their fans had been hoping for from Ruben since he tore up through the minors and onto the Major League roster. It would easily be the best season of his career.

Ruben wasn't happy to lose the AL MVP that year to Robin Yount. And rightfully so as far as I'm concerned.