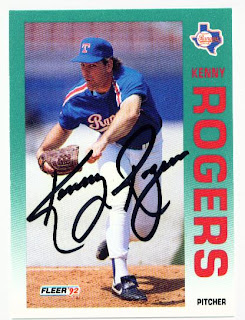 Well, the Rangers won today to hold on to at least a one game lead in the division. Good thing the Twins beat the Angels last night or there could have been a tie this morning.

Alexi Ogando went 6.1 innings and gave up two runs in the 5-2 victory. While he didn't go particularly deep in the game he did strike out seven while not allowing any walks. New Rangers Koji Uehara and Mike Adams both appeared out of the bullpen with better results than last night. Darren Oliver got his man as well and Neftali Feliz struck out two to get the save. Nice to see some good pitching again.

On the offensive side of the ledger nobody was a one-man wrecking crew but eight of the starting nine got at least one hit. Andres Blanco was the only hitter to get an 0-fer. Nice to see such an even distribution of offense. Even nicer to see Ian Kinsler with a walk, a clutch hit, and a RBI. Kinsler's been struggling lately and this is hopefully the beginning of the end of his slump.

Since today is Thursday I took a look to see what I could come up with in the way of an autograph or game-used card for this post. Turns out that I have very little in the way of current players that I haven't already posted. Nothing that really fit in with this game. As such I will leave you with this signed 1992 Fleer card of Kenny Rogers. The Gambler is supposed to be inducted into the Rangers Hall of Fame before Saturday's game so there is a tenuous connection to today's post.
Posted by Spiff at 9:01 PM