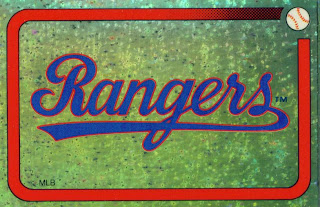 With the horrendous losses last night and tonight I decided to move on with T.R. Sullivan's Top 50 Decisions list. Two of the next three decisions deal with front office moves and one concerns a manager that I have already posted my only card of. As such I will bunch the three together in this one post with sticker number 450 in the 1989 Panini set serving to provide the Rangers team logo.

Number nine in T.R.'s list is the decision in 1973 to fire Whitey Herzog as manager of the Rangers. The gig was Herzog's first as a manager and he was given just 138 games before Bob Short fired him. Short should have let Herzog develop but he was impatient and committed one of the worst errors in team history. By 1975 Whitey was leading the Royals to a second place finish. By 1976 he was leading them to the first of three straight post-season appearances. Soon after that came his time with the Cardinals. Pure stupidity to let him go after such a short time.

Number ten is the 1994 housecleaning. General manager Doug Melvin and manager Johnny Oates were brought on board. Two years later the Rangers were in the post-season for the first time ever. Additional appearances in 1998 and 1999 followed.

Number eleven is also a housecleaning, this time in 1984 and 1985. Tom Grieve was hired as General Manager in 1984 and Bobby Valentine as manager in 1985. These moves didn't lead to a post-season berth but they did bring the franchise back from the steep decline it was in following the excitement of the mid to late 1970's. That would set the stage for Melvin and Oates to work their magic.