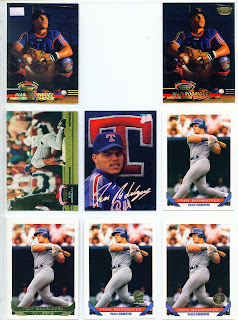 Monday again and time for our next installment of Pudge. Today we have an almost complete page of Ivan's cards. Here is the lineup for today:

The empty pocket is for the 1993 Stadium Club Members Only #524. In the Topps cards on this page we see a hint of the endless parallels to come that would eventually ruin any chance of player collectors to obtain the majority of cards issued for their players.

Well, the Halos hung on last night in Boston to win and keep their post-season alive. The White Sox triumphed in Chicago to deny the sweep to Tampa Bay. In the NL, the Brew Crew succumbed to the Phillies but at least avoided the embarrassment of a sweep. I must say that this post-season has been pretty interesting. Not having some of the perennial champs helps I think.
Posted by Spiff at 10:41 AM