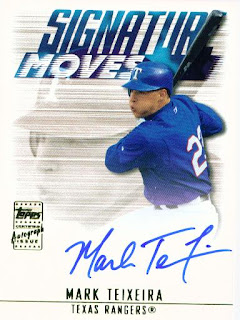 Sorry about the lack of posts the past two days. My Internet service went down just after Monday's post and wasn't restored until this afternoon.

Well, the post-season has begun and it is always interesting to see former Rangers and their teams in the mix. One such player is Mark Teixeira. We see Mark today on his 2003 Topps Traded Signature Moves card, number SMA-MT.

Last night Tex finally got his first taste of October baseball. He managed to go 2 for 4 and leave one runner on base as the Red Sox drew first blood against the Angels in game one of their series. With a score of 4-1, one wonders if the Halos' efforts to power up their lineup worked. Time will tell and the series could still go either way.

In other fall news, L.A. hammered the Cubbies and Philadelphia got a leg up on the Brewers. Tampa Bay and the ChiSox kick off their series this afternoon. Anyone have any predictions they want to make?
Posted by Spiff at 4:22 PM

I wish I could say it'll the Chi World Series, but it's not looking good for the cubbies to make that happen. The sox lost, but I think they'll pull it off.

You must have the same service provider I have - our internet has been sitting at about 25k (vs 1.5M usually) until today.

Well, at least you had something. Mine was completely out. Couldn't even get on to write a short post and let folks know what was happening.

I hadn't seen this subset before. I really like the design with the player's face in the background.

My Jays just did enough to get kind of close enough so that they won't fire Ricciardi. Si9gh....