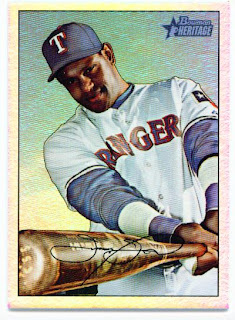 I have been deluged with Rangers packages the past few days. Some expected, some not.

To start off with, the ladies at Dinged Corners sent me a nice group of Rangers that I received on Monday. Included in the lot was this foil version of Sammy Sosa's 2007 Bowman Heritage card, number 122. This card filled a hole in my sparse 2007 Bowman Heritage set. There were also lots of other Ranger goodies in the mailer, including a very nice note from the famous Lucy! Awesome added bonus to get written communication and artwork from such a classy gal. Thanks ladies!

Two other packages arrived today. I haven't had a chance to get through either box yet but they are looking good from the outside. I will take notes as I open them and be sure to let you know what Adam from Missouri and David from Indians Cards sent. So far I have sent out return packages to Lucy and Adam. I'll try and get one together soon for you as well David.
Posted by Spiff at 3:39 PM

I got treated, well. Thanks!