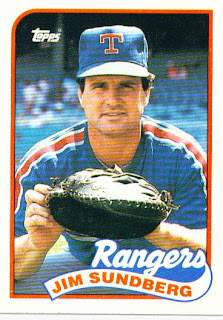 Some time back, I enjoyed a successful trade with Eric from Minnesota. He was on the hunt for Yankees and sent me a nice group of Rangers. Recently he contacted me again and asked if I was interested in a second trade. Of course!

I was only able to come up with 27 or so Yankees but Eric assured me that was enough and to send them his way. Off they went. Today I went out to get the mail and found an 800 card box. I looked at the return address and assumed Eric had run out of smaller boxes.

Inside the box was this 1989 Topps Jim Sundberg, number 78 in the set. I already had it but who can say no to a card of Sunny? Also in the box were approximately 750 other assorted Rangers cards. Wow! Just flipping through them I can see that Eric has completed at least two team sets for me along with overwhelming me with his generosity. This is truly a classy collector we have here. Thanks Eric. I owe you, and will be saving back Yankees for you.
Posted by Spiff at 6:34 PM

Glad to help fill some holes in the collection. I'll continue to send my Rangers your way!