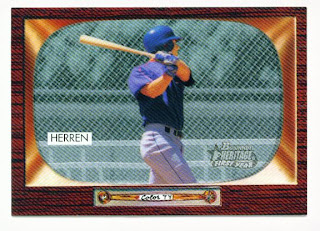 First off, nice game last night for both Tampa and the Phillies. Sorry to see Tampa lose their first ever World Series game at home but Cole Hamels was just lights out.

Decided to review both of the remaining boxes today in one post. In order to be fair to both of the generous guys who sent, I will post one card from each box. Ok, let's see what was in the boxes.

First off is Adam from Missouri. Adam emailed me recently about a team lot trade. My kind of deal. Adam was offering 50 assorted Rangers. There was one catch though, he wanted Red Sox in return. I had none as a regular trade partner keeps me cleaned out. Adam settled for a lot of White Sox, Indians, and Rays in return. Off when his cards and yesterday I got the Rangers from him. Of the 50 cards I needed 11. One of the 11 was this 2004 Bowman Heritage K.C. Herren, number 254. A 22% hit rate on a blind trade is a deal I would take any day of the week. Thanks for the great trade Adam! 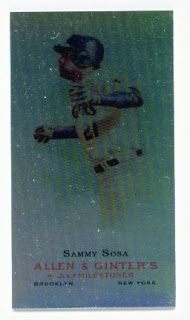 Moving on from Adam's smash hit, we have a box from David over at Indians Cards. This was part of his "Trick or Treat" giveaway and was so decorated. I was somewhat hesitant to open it but found that I had been treated, and well at that! Of the 135 cards that David sent, I needed 32 for an almost identical success rate as Adam. What are the chances? David sent along some pretty great cards, including this Sammy Sosa. It is number 6 in the 2007 Allen and Ginter Milestone set and is serial numbered to 999. This set was offered only through the eTopps program and only as part of the set. It is a card that is much better looking in person than scanned (too shiny). I had figured that this was a card I would never own since I was unwilling to purchase the set, but here it is. Wow! Thanks a million David. I have an Indians lot almost ready to go out to you in return but it may have to wait until next week to ship.

In summary, if you are ever e-mailed by Adam in Missouri and he wants to trade - do it! A trader of the first class to be sure. If David offers to send you some cards - let him! A generous and classy blogger.
Posted by Spiff at 4:20 PM

I'm glad you needed the Sosa! I was afraid it would be one you already had. :-) I'm actually suprised you needed as many as you did! That's awesome. :-)

I'm glad you needed some of the cards I sent. I got the cards you sent yesterday and my son will be happy when I give him the White Sox (sometimes you have to bribe children). I have started a new blog of my own. I hope you check it out sometime. http://thoughtsandsox.blogspot.com/

Thanks again to both of you. I'll try and make time to check out the new blog.