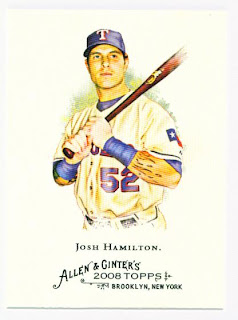 Today's card is number 211 in the 2008 Allen and Ginter set, Josh Hamilton. Hamilton was just voted the American League Outstanding Player for the past season. This award is voted on by the players and recognizes the best player in the league. There is an article on the award here. Congratulations to Josh on the award and the season. More importantly, way to go in pulling your life back together.

I have also added a new link to the Handy Card Links. Matt over at Heartbreaking Cards of Staggering Genius is a Royal's fan, 1971 Topps collector, and an entertaining writer. He is also currently on the Endangered Species list along with both of the Royals other fans. In the interest of full disclosure, I will state that I expressed interest in a Michael Young card that Matt had posted on his site and agreed to add his blog for the card. I guess crass commercialism creeps in everywhere. Anyway, head on over to Matt's blog, give it a read, and tell him Spiff sent ya.
Posted by Spiff at 4:11 PM