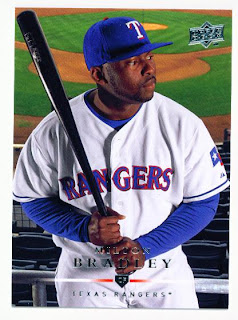 Milton Bradley, seen here on card number 673 of Upper Deck's 2008 set, is now officially looking for work. With Milton you get a pretty big bat, some pretty bad knees, and an unpredictable temper. Probably just the kind of player your team needs if you have a manager good at dealing with the players and need to fill the DH/occasional outfielder spot.

Bradley's not the only one up though. Jason Jennings, Ramon Vazquez, Hank Blalock, and Jamey Wright also filed for free agency yesterday. Blalock seems likely to have his option picked up by the Rangers and it is possible that Wright might be resigned. The others are likely to find new homes as the free agent frenzy begins.

As for the Rangers, they are planning on taking a look at starting pitching, either a cheap signing or in trade. Jon Daniels has said that he won't trade the future for now but is not adverse to moving a few younger players if that will result in pitching improvement.

The debate on free agency has raged since Curt Flood sued to invalidate the reserve clause. Some think it has helped baseball and some believe it has hurt. I tend to lean towards the hurt camp but often argue both sides. Let me hear what you have to say. Is Flood's legacy a credit or debit to the game?
Posted by Spiff at 4:16 PM

I'm currently writing a play about Flood, Marvin Miller and the lawsuit that helped bring about the end of the reserve clause. On a strictly financial basis, there's no doubt that baseball is healthier today than it was during the years of the reserve clause. And there's more competition with more teams making it to the playoffs, making for more exciting games. Between 1921 and 1970, the year Flood filed his suit, the Yankees were in the World Series 29 times, almost always playing against the Cardinals, the Giants or the Dodgers. The reserve clause was a bad system that often kept good players warehoused on the bench who could have had more active careers on other teams.

Valid points. The competition point is the main one that tends to pull me towards the positive answer.

On the other hand, fans now no longer know their teams. The players change from year to year and little loyalty builds. That seems somewhat sad to me.