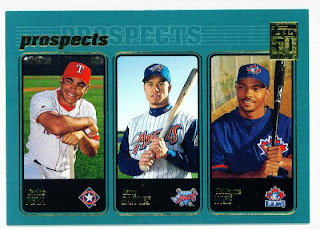 Carlos Pena, seen here on card number 731 of the 2001 Topps set, and his Tampa Bay teammates have been death on Boston pitching.

After winning 9-1 in Boston last night they are now leading 11-1 in the sixth inning. A win tonight will put them up 3-1 in the ALCS and one win away from the World Series. Wow! Who would have ever thought to see Boston so totally thumped in the post-season?

In the NLCS, the Phillies now lead the series 3-1 and will go for the kill tomorrow night in L.A. I was a bit torn over this series. I wanted to root for the Dodgers, but just couldn't stomach Manny Ramirez. If for no other reason than getting him off the stage I am glad to see Philadelphia up.
Posted by Spiff at 9:02 PM