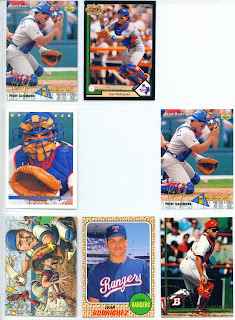 Wow! What a weekend in baseball! First the Rays appear to be on their way to choking, then they win it all last night. There is probably much sadness in Beantown but at least they played the series out as far as they could. Congratulations to the Rays and their one or two fans.

So we reach the end of 1993. Six more years to go in this binder. The empty pockets are left open for the 1993 Upper Deck Gold Hologram cards number 52 and 450. Of these seven cards I like the Sports Cards Magazine one the most. Nothing beats the classic designs.
Posted by Spiff at 12:49 PM