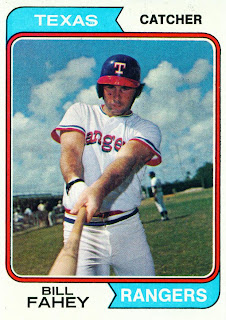 1974 was a disappointing year for Bill Fahey, pictured here on card number 558 of the 1974 Topps set. It came on the heels of an equally hard season in 1973. In August of 1973 Bill had been playing with Triple A Spokane. He was having a decent year when a collision at home plate gave him five broken ribs and a punctured lung. That would end his 1973 season.

He was back from that though and ready for Spring Training. Camp hadn't hardly begun though when he was hit in the face by a wild pitch the first day. Back to the hospital he went again, this time for reconstructive surgery.

The injuries resulted in Fahey spending most of what was left of the 1974 season in the minors. He did see some limited action for the Rangers though.

In the six games Bill Played for Texas he came to the plate 17 times. His batting average and on-base percentage were an identical .250. He had no extra base hits and no RBI. In 40 innings on defense Bill never made and error and caught the only runner who tried to steal on him.

Frustrating as the last two seasons were they seemed to have demonstrated Fahey's ability to get back into the game after an injury. Now all he had to do was hope his luck held for 1975.
Posted by Spiff at 8:41 PM