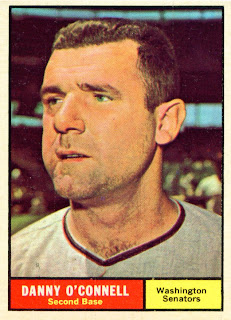 The Senators rescued eight-season veteran Danny O'Connell. After spending the entire 1960 season in the minors he was released by the Giants. Washington signed him on January 7, 1961. He would spend the 1961 season back in the Majors trying to resurrect his career.

Danny, shown here on card number 318 of the 1961 Topps set, played in 138 games for the Senators in 1961. 74 of those games were at third base and 61 were at second base. He would post a .939 fielding percentage at third base - eleven points below the league average. At second he was much better with a .978 fielding percentage - exactly the same as the league average.

On offense O'Connell would come to the plate 591 times. He would walk 77 times to easily lead the team in that category. His on-base percentage was .361, over a hundred points higher than his .260 batting average. Danny would steal 15 bases (second on the team) and would lead the league in sacrifice hits with 15. His real specialty though was doubles. His 30 two-sackers led the team and placed him 7th in the American League.

All things considered, Danny O'Connell had a successful comeback season in 1961. What remained to be seen was if he could translate that success into a long-term resurgence or if he had simply caught lightening in a bottle.
Posted by Spiff at 6:18 PM