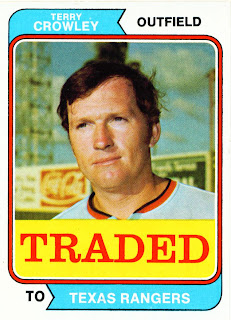 Terry Crowley, shown here on card number 648T of the 1974 Topps Traded set, was not traded to the Rangers. On December 6, 1973 the Rangers purchased the "seldom used outfielder" from the Orioles.

On March 19, 1974 they sold him to the Cincinnati Reds. Terry was in and out of Texas without ever appearing in an official Major League game. This in spite of the back of his 1974 Topps Traded card proclaiming that "the indications are that Crowley will be given every opportunity to win a starting outfield berth with the Rangers."
Posted by Spiff at 4:49 PM