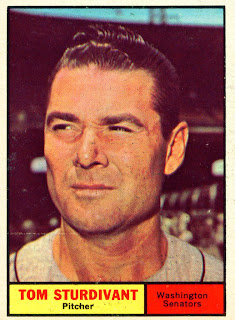 The Senators grabbed Tom Sturdivant from the Boston Red Sox in the 1960 expansion draft. Today he is appearing on card number 293 of the 1961 Topps set.

None of Sturdivant's numbers were career bests, they really weren't even standout numbers. That might have been why Washington didn't hold on to him. On June 29, 1961 the Senators traded Tom to the Pittsburg Pirates straight across for pitcher Tom Cheney. That would end his brief tenure as a Senator.
Posted by Spiff at 12:01 PM