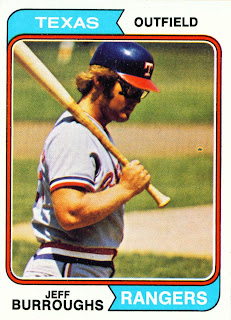 Another poor picture today on card number 223 of the 1974 Topps set. Jeff Burroughs' face is so obscured by shadow that it's hard to make out his features. Not that getting a good shot should have been hard, by the looks of things this was a day game.

Despite his poor cardboard showing, Jeff had an awesome year in 1974. The Rangers' first-string right fielder played in 152 games that year. And what a 152 games they were.

As a result of this performance Burroughs won the American League MVP award by an overwhelming majority. He was the only player mentioned on every ballot and beat second place Joe Rudi by 86.5 points in the voting. Other top vote getters included Sal Bando, Reggie Jackson, Catfish Hunter, and Fergie Jenkins. Pretty impressive company and stiff competition for the MVP award. This award was historic stuff. No other player from an expansion team had ever won the MVP award. In just his second full season in the majors Jeff Burroughs appeared to have broken out in a big way.
Posted by Spiff at 6:08 PM