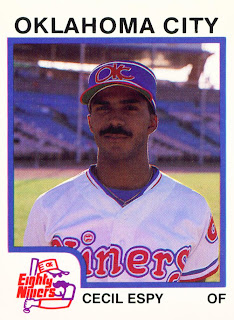 The Rangers picked Cecil Espy up from the Dodgers in the 1986 Rule 5 Draft. By that point he had appeared in 20 games for the Dodgers at the Major League level. In 1987 he appeared on card number 148 of the 1987 ProCards set as a member of the Oklahoma City Eighty-Niners.

Cecil spent most of the 1987 season in Triple A. He would play in just 14 games for the Rangers as compared to 118 for OKC. In those 118 games Espy would come to the plate 482 times. In those plate appearances Cecil would draw 31 walks and would post a .302 batting average. That would result in a .347 on base percentage.

I remember Espy as a speed merchant and his 1987 numbers bear that out. He stole 46 bases and was caught 14 times. He wasn't a power hitter though with just one home run and six triples all season.

Espy played mostly outfield during his career. Interestingly though, he played 51 games at shortstop with OKC in 1987. Not sure if this was an attempt to convert his position or the result of injuries to other players. It didn't seem to stick though and his fielding percentage dropped by six points with the move. Defensively he was better in the outfield.

Based perhaps mostly on his speed, Texas decided to hang on to Cecil Espy. He'd had a good year at Triple A and his brief stint with the parent club was inconclusive. Perhaps he might get a better look the next season. If he could convert his batting average to the Bigs he could well be a danger on the base paths.
Posted by Spiff at 12:08 PM