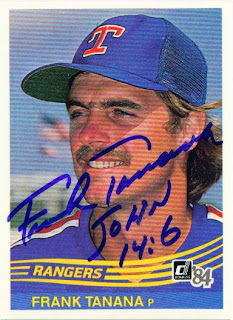 The reason I decided to post this card today is because Frank Tanana was my starting pitcher last night. Finally got a friend of mine over to try out the Strat-O-Matic game. Since he is a Royals fan (I think maybe the only one) I had set aside the 1984 Royals for him. To counter I played the 1984 Rangers.

The game was a 18-1 blowout. Frank did not have a good night. He went just one inning and gave up seven runs while committing two errors. George Brett hit a three run homer off him which delighted my friend. Obviously the bullpen wasn't much better than Tanana was. Just brutal.

In spite of losing I had a good time. Spent the game conversing about baseball and life and enjoyed ourselves. Might have even hooked another Strat fan. Going to have to ask for a rematch though.
Posted by Spiff at 4:36 PM

1976 Frank Tanana just pitched a 2-hit shutout against the Yankees on August 22 of my replay. That date will be up on my blog in a few days.
http://relivingthe1976baseballseason.blogspot.com/