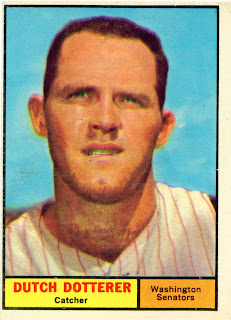 Ok, so today's Senators card is something of a mystery. Card number 332 in the 1961 Topps set is Dutch Dotterer's card. However, the site that I got my checklist for this team set from has a note beside this card that the photo is not Dutch but Tommy Dotterer. I can't find any record of Tommy though. Having said that, I am not sure the player pictured here matches the picture of Dutch that is on Baseball-Reference. Anyone care to shed any light on this?

Regardless of who is on the card, it was Henry John "Dutch" Dotterer who was drafted from the Kansas City A's in December of 1960 by Washington. Dotterer would spend most of the 1961 season in the minors. He would get a short seven game stint with the Senators though.

In those seven games Dutch would come to the plate 22 times. He would post a .364 on-base percentage and a .263 batting average. His only extra-base hits would be two doubles and he would have just one RBI.

In 55 innings behind the plate Dotterer would commit no errors. He would also catch two of the five base thieves that ran on him. He allowed no passed balls.

Those seven games would be Dutch's last in the Big Leagues. He would spend 1962 back in the minors and then would hang it up. A shame indeed if his last card didn't have his picture on it.
Posted by Spiff at 8:36 PM