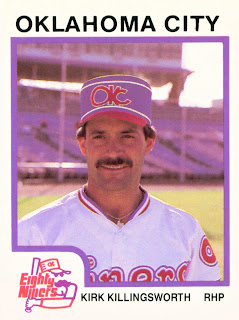 I could find no record of how Texas obtained Killingsworth. His first year on record as a pro ball-player is 1983 where he started with Double A Tulsa. In 1984 he took a step back to Single A. 1985 and 1986 saw him back in Double A with Tulsa. In 1987 he would reach Triple A with Oklahoma City.

Killingsworth pitched in 28 games for the Eighty-Niners in 1987, all were starts. In those starts he went 161 innings pitched - a career high. He would post a rather high ERA of 5.81 and end the season with a record of 6-14. Kirk apparently had some control issues as he walked 78 batters while striking out just 74. His WHIP was a hefty 1.752.

Evidently Texas did not like what they saw with Kirk in 1987. It would be his last season in the Rangers organization. In 1988 he would play minor league ball for the Oakland A's at both the Double and Triple A levels. There is no record of how he changed organizations. 1988 would be his last professional season.
Posted by Spiff at 9:24 PM