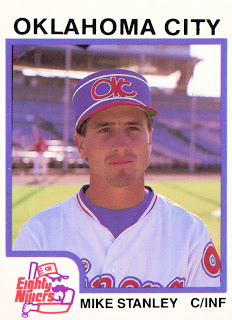 Mike Stanley, shown here on card number 140 of the 1987 ProCards set, split the 1987 season between the Majors and Triple A. He would play in 78 games with Texas and 46 with Oklahoma City.

While with the Eighty-Niners Mike would get 216 plate appearances and post a .431 on-base percentage with 29 walks. His .335 batting average included 13 home runs and 54 RBI. He also scored 43 runs himself.

In the field Stanley played mostly behind the plate although he did play a small amount at first base. He had a .993 fielding percentage when receiving and only two errors in 41 games.

Mike's numbers at Triple A were pretty good. Good enough to earn him a call-up to Arlington and half a season there. 1987 would be his last appearance in the minors. After only three season as a pro he was on his way in The Show.
Posted by Spiff at 8:28 PM