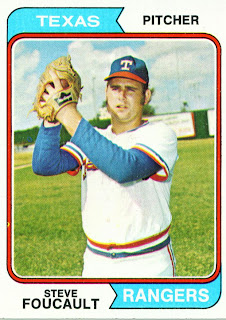 In just his second year of Major League service Foucault hit his stride. He appeared in 69 games (most of any Rangers' pitcher) and finished 53 of them. His 12 saves were the sum total of the team that year. His 2.24 ERA was also a team-leading number. His 1.129 WHIP was second best on the team. He led the bullpen in innings pitched with 144.1 and in strikeouts with 106.

Steve had indeed shown bright in 1974 and was one of the key reasons for Texas success as they finally got into a pennant race. It looked like a bright future beckoned in 1975.
Posted by Spiff at 12:06 PM

I have always liked the 1974 set for the art. Love the unies!