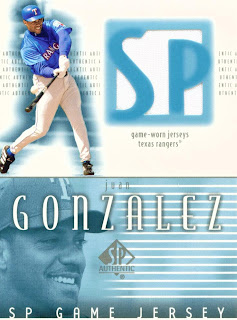 Juan Gonzalez and a piece of his jersey appear on today's card, a 2002 SP Authentic Game Jersey #J-JGo. SP chose a rather embarrassing picture as it looks like Juan has just swung and missed.

So, Juan Gonzalez and Rafael Palmeiro are both on this year's Hall of Fame ballot. Both spent considerable time with the Rangers. Raffy was in Texas for ten seasons out of 20. Gonzo was there for 13 of his 17 seasons.

Gonzalez ended his career with a .295 batting average and a .343 on base percentage. He hit 434 home runs, 388 doubles, and had 1,404 RBI. He also won six Silver Slugger awards and two American League MVP awards. He was selected to three All-Star games. He led the American League in slugging percentage once, doubles once, home runs twice, and RBI once.

Palmeiro compiled a career .288 batting average and a .371 on base percentage. He hit 569 home runs, 585 doubles, and had 1,835 RBI. He also won two Silver Slugger awards and three Gold Gloves. He was selected to four All-Star games. He led the league in hits once, doubles once, and singles once.

Raffy also lied to congress about his steroid use as proven by a failed test. Gonzalez has been mentioned as a possible user but there has never been any proof.

So, what is your opinion? Should either or both of these guys get into The Hall? If you had a vote would you check their name? Why? Why not?
Posted by Spiff at 12:12 PM

I'd like to say no to those and countless others, but I don't know how lines can be drawn. There are players we "know" were on PEDs, but nothing ever came out about them. What do you do there?
Unfortunately, I believe all will eventually get in.