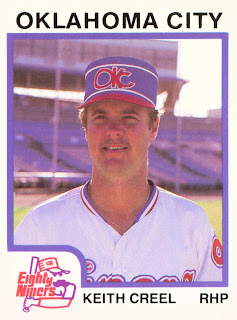 Texas signed Keith Creel as a free agent in December of 1986. He was assigned to Triple A Oklahoma City as shown on card number 139 of the 1987 ProCards set. Prior to signing with the Rangers, Keith had 49 games of Major League experience spanning three seasons and two clubs.

While not outstanding, the numbers got him another shot at the Majors. Keith would appear in six games in relief for Texas in 1987. In those 9.2 innings he would be actually lower his ERA to 4.66. Not what the Rangers were looking for though, in October they would let him go back to free agency. He wouldn't sign with another team.
Posted by Spiff at 12:07 PM