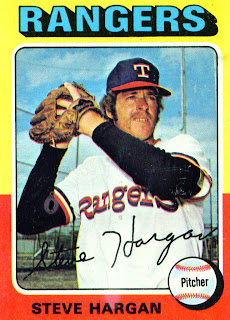 Steve Hargan, shown here on card number 362 of the 1975 Topps set, had a rather odd year in 1975. After a decent 1974 season it seemed like Steve's numbers couldn't decide if they wanted to improve or not.

Depending on which stats one looks at, Hargan was either the second or third starter in the Rangers rotation. He would make 26 starts in 33 appearances and end the season with a 9-10 record. He would pitch a total of 189.1 innings, up slightly from the year before. Hargan's ERA dropped by 15 points to 3.80 but his WHIP climbed to 1.400. This was mostly due to his walks jumping by 14 to 62 on the season, his hits allowed total inched up by just one. His strikeout total came to 93, five less than the previous year.

1975 was a troubling year for Steve Hargan. He didn't implode but there were signs of trouble ahead. In addition to the above numbers he also threw 12 wild pitches and allowed 17 home runs. Apparently he was struggling with his control. If he wanted to stay in Texas for the 1976 season he would need to address that issue. If he couldn't figure it out his post playing career in the mail order business might arrive sooner than estimated.
Posted by Spiff at 12:06 PM

I wish you a year full of achievements in 2012 on all levels!