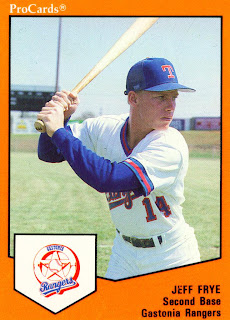 Card 1023 of the 1989 ProCards set makes me smile. Jeff Fry looks so intense and yet so young. His boyish face, slight build, and screen-backed cap make him look more like a high school ballplayer than a 22-year-old man attempting to play his way the Major Leagues.

The Rangers drafted Jeff in the 30th round of the 1988 draft. He played in Rookie ball the same year with the Butte Copper Kings. In 1989 he would be assigned to Single A and would play with the Gastonia Rangers of the Gulf Coast League.

In 125 games Fry made 543 plate appearances. He posted a .313 batting average and a .405 on-base percentage. His on-base percentage was helped by the fact that he knew how to take a walk. He worked 72 of them while striking out just 53 times. While Jeff could get on base he didn't have much power at the plate. He hit 26 doubles but only three triples and one home run on the season. He could run though and stole 33 bases but needed to work on his technique as he got caught 13 times.

As the front of his card indicates, Jeff played second base. In 1989 he put together a .977 fielding percentage at that position. His errors matched his uniform number, 14. Defense was definitely an area for improvement in Fry's game.

Apparently the Rangers thought Jeff had potential. Probably it was his bat that caught their eye. As a result he got a promotion. Not to Double A though but to A plus Charlotte for the 1990 season. I'm not positive but I would guess that the partial promotion had to do with the need for him to improve his glove work.
Posted by Spiff at 12:10 PM