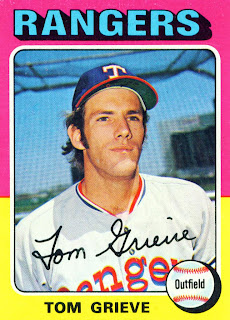 Tom Grieve, shown here on card 234 of the 1975 Topps set, had a two-fold mission in 1975. First, he had to build on his 1974 performance and second he had to prove he could hit right-handed pitching.

Tom played all three outfield positions in 1975 and served in 41 games as the designated hitter. He played left field most with 328 innings in 46 games. Next up was right field with 126 innings in 16 games and then center with ten innings in two games. His fielding percentage for all three positions combined was .990, better than the league average by eleven points.

Tom Grieve had been given a chance in 1975 and seemed to have used it. Perhaps he hadn't awed observers but he had significantly improved his offensive performance in almost every category while starting to hit right-handers and had maintained his great defense in the field. The only disturbing trend was his tendency to strikeout, he would need to figure out how to cut down on that. If he could 1975 looked to be his breakout year.
Posted by Spiff at 11:53 AM

Tom is a Texas Ranger institution. I'm on a mission to get some Grieve TTM's this season.